One morning shortly after my younger daughter turned 18, she showed me the cover art for Florence and the Machine’s song “King.” In the photo, Florence reclines on a divan, gazing at the viewer with steady determination. My daughter said, “She looks like a woman who sees God and wants to honor that vision.” Since at the time, I was deep into a translation project involving Bible, gender, and the English language, visions of God were a regular topic of conversation in our home. I understood my daughter’s comment: She meant to underscore the conflict many feel between their personal encounters with the Divine Presence and the depictions of God they read in the Hebrew Bible. 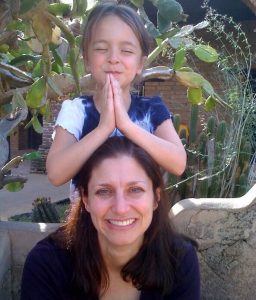 Although the second of the Ten Commandments requires us to view God as without form and without personification, our minds and hearts need metaphor. That’s why our sacred texts, the repositories of our collective wisdom, offer many kinds of images for divine presence. Yet we don’t reach for those diverse images often enough when speaking about God. Why is that?

Perhaps it’s because of the male pronouns and gendered terms we use for the God of Israel, especially “Lord.”  He who took us out of Egypt with a mighty hand and an outstretched arm, He whom we are commanded to love, serve, and worship, He whose presence fills the Earth, and so forth—this is our God. So it’s no mystery why, when we hear Torah chanted in synagogue, study Bible or rabbinic texts in chevruta, or speak directly to God in prayer, we often conjure up an image of God that is exclusively male—despite the many metaphors that can be found throughout the Hebrew Bible, from Deuteronomy to Isaiah to Psalms.

How many of us can truly reach beyond this maleness, and, as the author of Engendering Judaism, Rabbi Rachel Adler wrote to me in an email, “try on the garment of other identities” to include ourselves in the narrative of the Jewish people? How many people stop at “Lord” and leave, feeling that this is a God they don’t or won’t believe in? Even those who can get past the overwhelmingly male designations still need to take a few extra steps at almost every verse, every psalm, and every prayer to weave their own connection into the text.

This has been a cri de coeur from feminist Jews for decades, including prominent scholars and writers like Cynthia Ozick (Notes toward Finding the Right Question), Judith Plaskow (Standing Again at Sinai), and Rabbis Tamara Eskenazi and Andrea Weiss (The Torah: A Women’s Commentary), to name only a few.

It makes sense that the pronouns we use in English project maleness onto God; up until recently, the “default” pronouns in English were male. But today, many lexicographers, linguists, and literary scholars no longer regard man and mankind as acceptable terms for humankind, nor do they accept he as a generic pronoun for anyone.

Fortunately, there are ways to translate our texts without using exclusively male pronouns for God. What a gift this is to English-speaking Jewish communities the world over. Many English-language (and some Hebrew) readers have already found other ways to express themselves in prayer and conversation when speaking to or about God. They have been guided and supported by liturgists and publishers who offer prayer books with alternative God language for use in worship. Some translators have also introduced alternative language in sections of the Bible.

But the entire Hebrew Bible—the Tanakh (Torah, Prophets, and Writings)—has never been translated into English without the male-centric God language—until now. I’m part of a team that is nearing completion on the first-ever translation to do this. Once The JPS Tanakh: Gender-Sensitive Edition is published in 2023, English speakers will finally be able to read the vast collection of texts that comprise the Hebrew Bible without having to imagine their way into the God language.

God’s personal name, whose English substitution is typically the Lord, has become, simply, God, and references to God as He or Him have practically disappeared. I hope these changes, and others, will allow more people to honor their vision of the Divine Presence, enhancing our already rich tapestry of collective Jewish wisdom. It is meant to be a gift for rising generations, like my daughters’. How it will be received is up to them.